Following the great success of the first edition, the opera course was held for a second time at the Palazzo Contucci in Montepulciano.  This edition , like that of 2012 , drew young opera singers from around the world (Argentina , Bulgaria, Italy , Japan, Russia). Internationally recognized vocal coaches, teachers, directors, lecturers and industry professionals offered worked with the participants to expand their knowledge, skills and development in vocal, musical and interpretive training and stagecraft .

The Corso d’Opera was divided into two sections:

The first section, from July 28 to August 5, offered masterclasses in musical interpretation with Maestro Andrea Severi , piano collaborator and vocal coach at the Maggio Musicale Fiorentino, replacing Maestro Bruno Bartoletti, who passed away shortly before the courses were to begin. During this same period, participants engaged in movement classes with Anna Pasculli, dancer, choreographer, member of Münster’s Tanz-Theater, and former student of the legendary Pina Bausch.

In the second section, from August 5 to 11, masterclasses were offered in vocal technique with Maestro Raphael Sikorski in collaboration with Beatrice Benzi, pianist at the Teatro alla Scala in Milan, along with classes in dramatic interpretation, movement and the use of the theatrical mask with Stage Director Fabio Sparvoli .

Throughout the two weeks, the Opera Course presented a series of lectures and discussions to help participants expand and deepen their knowledge of the many diverse aspects of a career in opera.  These discussions ranged from the connection of the body and the mind, and how to strengthen the immune system to sword-fighting, preparing for auditions and management.

The program included :
o Dr. Franco Fussi, otolaryngologist and voice pathologist: Resonance and Warm-Up
o Dr. Marco Mancini, immune system specialist: Health is a Precious Gift
o Dr. Roberta Giommi, Psychotherapist, Director of the International Institute of Sexology:
Music and Emotion
o Dr. Alessandro Temperani, Psychologist and Psychotherapist, Certified Bionenergetic Therapist:  The Con-nection of the Body and the Mind
o Renzo Musumeci Greco and Martina Ganassin, Masters of Arms/Instructors/Fight Directors: The appropriate use of theatrical arms such as swords, sabres, pistols, daggers, halberds (combination of spear and battle ax used in 15th and 16th centuries), etc.
o Vinicio Cheli, lighting designer:   Practical and theoretical session at the Teatro Poliziano
o Maestro Lorenzo Ferrero, Composer and President of the International Council of Creators of Music: Audi-tions – what to do and what not to do
o Mauricio Fernandez, Casting Director NTR Zaterdag Matinee:  How to decide which vocal competitions are the right ones for you
o Maestro Gianni Tangucci, Artistic Director of the Maggio Musicale Fiorentino: The Singer and Beyond…an open discussion of my 44 years in the theatre
o Mauro Carosi and Odette Nicoletti: “How a Show is Born”:  including a discussion of proper theatrical ter-minology, how to feel space on stage in costume, the history and use of costumes and accessories (gloves, mantellas, hats, fans, walking sticks)
o Moira Johnson, Public Relations and Press Agent, Raffaella Coletti, Artists Manager: “Tips for artists on dealing with the media and the press”.

July 28: The final concert of the Festival Cantiere Internazionale d’art, in collaboration with the Opera Course, featured tenor Antonio Corianò and mezzo-soprano Martina Belli, both of whom participated in the 2012 Op-era Course, conducted by Maestro Roland Böer.

OPEN CLASSES: On 3 and 4 August principle courses were open to guests from the Italian and international mu-sical and theatrical worlds and the media.  There were two hours of musical interpretation with the Maestro Andrea Severi and two hours of stage direction with Fabio Sparvoli.  All the students had the opportunity to present their skills and talent in front of a public of professionals. This initiative was appreciated by all present, who were able to observe closely the work of both the students and the instructors.

ROUND TABLE:  The August 4 Round Table on the training of young opera singers, like last year, offered much food for thought.

The discussion among teachers, students, organizers, industry professionals and guests at the Open Classes including Franco Rossi, Counselor for Culture of the City of Montepulciano, and Paul Barcucci, the  President of the Fondazione San Girolamo, concluded that the experience of the Corso d’Opera at the Palazzo Contucci surpassed in many respects that of 2012.  With pleasure and satisfaction, the Corso d’Opera announced that it has received positive feedback from three theaters, Teatro Regio in Turin, Teatro Regio in Parma and Teatro Petruzzelli in Bari, to the request made last year for practical help in launching  the careers of the Masterclass students. In recent months, some of the students were invited to audition , successfully being cast for the 2013-2014 and future seasons.

The teachers of the principle courses expressed their satisfaction with the Corso d’Opera both as an excellent initiative and for the integrity of the instruction and the high artistic level of the students. All the instructors expressed their desire to be invited to future editions.  In particular, Maestro Sikorski has made himself available for future winter Masterclasses.

The students said they had received a very intense and productive artistic training experience, that the 2013 edition was profitable, and that they found the technical and artistic instruction to be innovative and stimulating.

In addition to teachers, industry professionals also participated in the Corso d’Opera:

Eva Maria Wieser, former Artistic Director of the Opera Bastille (until 2003) and the Salzburg Festival (until 2011), currently Advisor to the Lyric Opera of Chicago.
Andrea Severi, Substitute Instructor and staff member of the Maggio Musicale Fiorentino.
Fabio Sparvoli, Director of Opera and Theater.
Alessandro Mormile,  independent music critic for the  Opera magazine. The magazine is a collaborator of the Corso d’Opera.
Arturo Francesco Saponaro, music critic of Classic Voice magazine, also a collaborator of the Corso d’Opera.
Moira Johnson, Press Agent for many important classical music artists in North America.

All participants were enthusiastic about the project “Corso d’Opera”, which has  defined a new international standard for the training of young singers. Cited as particularly enjoyable were such initiatives as the lesson on “lighting” with the theater lighting designer Vinicio Cheli, the day dedicated to fencing, and the participation of doctors and psychologists who were able to offer insight into aspects of the profession that the students would not necessarily have considered but are nonetheless important.

All participants noted the necessity of an opera course at this level and, in particular, Alessandro Mormile and Arturo Francesco Saponaro urged that in the future this initiative become even more relevant and could be supported, including but not solely economically, by all the institutions of Montepulciano.

This initiative becomes even more valuable at a time when the tradition of the great masters of ‘reading’ and ‘interpreting’ opera scores is being forgotten and the artistic level  of those young singers – and not only young artists — who sing the nineteenth-century Italian  repertoire does not meet the expectations of the public and critics in the industry. All participants agreed that raising the standards of performance of Italian opera, as well as advanced training for young professional singers, is the most important goal of the Corso d’Opera.

In fact, the stated purpose of the newly-formed Corso d’Opera  Association is the teaching and support of Italian opera, for which for several centuries Italy has been recognized as the world leader.

Another important component in the success of this Opera Program are the locations used by the program:
o the Teatro Poliziano, the Palazzo del Capitano and the Palazzo Contucci, all monumental buildings surrounding Piazza Grande, itself an open-air stage.
o The Palazzo Contucci, headquarters of the Corso d’Opera, is a palace designed and built by Antonio da San Gallo (the Elder) in the first half of the 16th century. The classes were held in the palace Ballroom, located on the ‘piano nobile’ (first floor), which was frescoed in 1701 by Andrea Pozzo, a master of ‘trompe l’oeil’.

The Course organizers are working hard to find the financial resources necessary to achieve in the coming years a true theater school with parallel courses for the training of technical and administrative staff, such as managers, electricians, machinists, props-makers, costume-makers, hair and make-up artists, directors, and administrative staff, using highly experienced professionals who can pass on their “art and profession ” to young people.

The Opera Course organizers gratefully acknowledge the support of the Palazzo Contucci, the Fondazione Conservatorio San Girolamo and the City of Montepulciano. 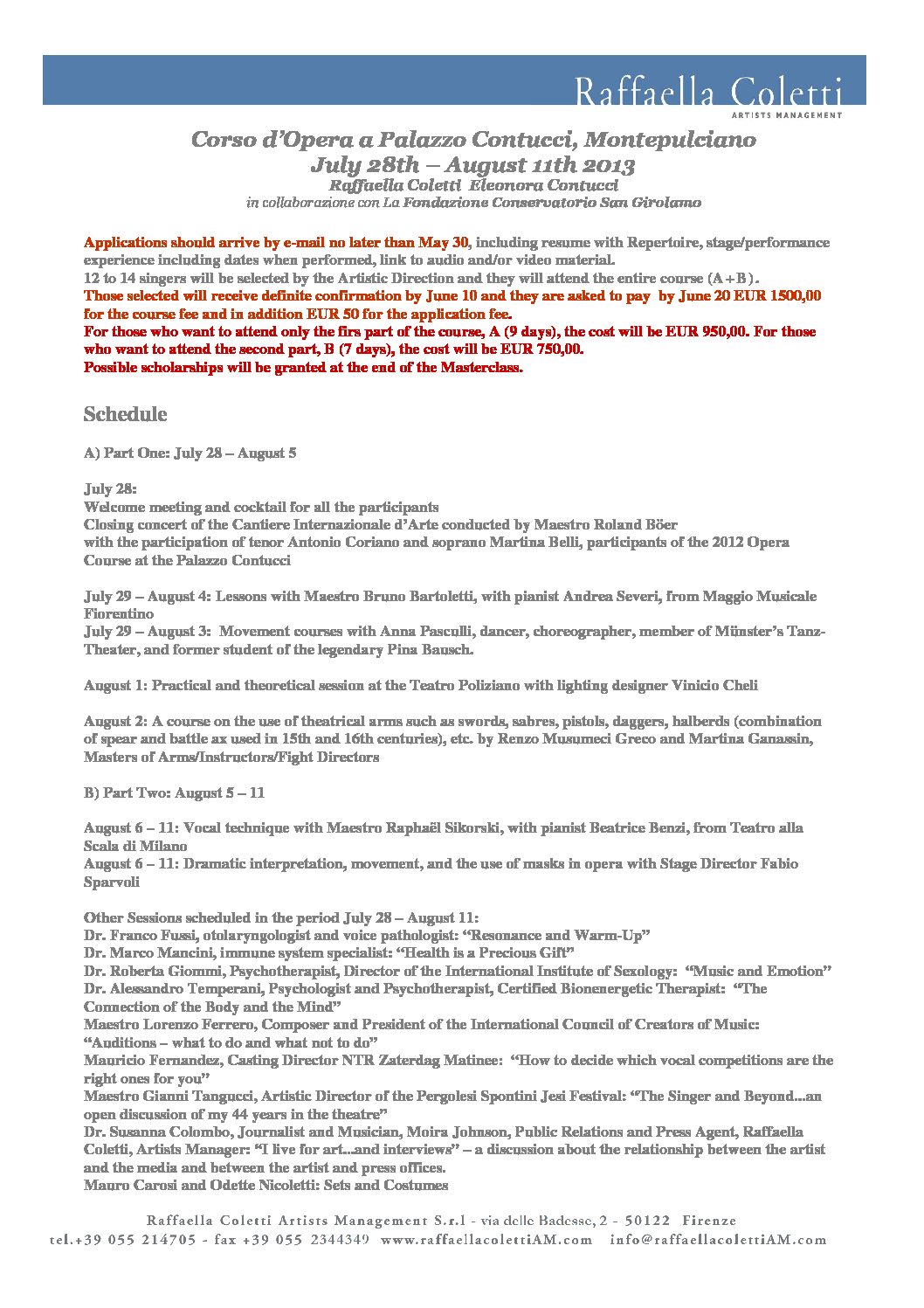