The first edition of the Opera Program, held from July 25 to August 5, 2012 at the prestigious Palazzo Contucci in the centre of one of Tuscany’s most beautiful and famous hill towns, was a great success. Created for young professional singers, seminars and masterclasses were offered by faculty of the highest professional level from a wide variety of areas in the opera world. Twelve singers from around the world (US, Turkey, Bulgaria, Italy, Japan, and Russia) were selected by the Artistic Directors to participate in the Program.  The students were able to advance their vocal technique, musicianship, scenic/theatrical preparation and dramatic interpretation through three principal areas of study.

Musical Interpretation: A Program in musical interpretation was given by Maestro Bruno Bartoletti, internationally acclaimed orchestra/opera conductor accompanied at the piano by Andrea Severi.

Dramatic Interpretation/Stagecraft: A Program concentrating on body movement and stagecraft was taught by Fabio Sparvoli, theatre and opera stage director.

Participation in small group discussions and seminars allowed students to increase their knowledge of their artform and become acquainted with the many diverse components that make up the career of a professional opera singer today.

The masterclasses, lessons and discussions were given by:

Maestro Bruno Bartoletti, former Artistic Director of the Maggio Musicale Fiorentino, the Lyric Opera of Chicago, the Verdi Festival in Parma, and currently Honorary Artistic Director of Lyric Opera Chicago who focused on the rapport between the singer, the conductor and the orchestra.
Carlo Fontana, currently General Director and Administrator of the Teatro Regio of Parma, previously of various renowned opera houses who discussed his personal experience of 40 years in the world of opera and theatre.
Francesco Zito, Costume and Set Designer presented the history and use of costumes and accessories such as gloves, capes/cloaks, fans, walking sticks, canes, etc in order to increase the participants’ familiarity with these key elements of opera. He also discussed theatrical terms and the use of space on the stage.
Vinicio Cheli, Lighting designer illustrated the technical terminology of stage lighting including learning to “feel the light of a scene”.
Renzo Musumeci Greco, Master of Arms/Instructor/Fight Director focused on the appropriate use of theatrical arms such as swords, sabres, pistols, daggers, halberds (combination of spear and battle ax used in 15th and 16th centuries), etc.
Franco Fussi, Voice Pathologist, discussed the physiology of singing and vocal health for singers.
Matelda Tagliaferri, Psychotherapist, talked about the origin, causes and the possible techniques to handle the stress of a professional career.
Raffaella Coletti (RCAM), Caroline Woodfield (Opus 3), Artists Managers presented a seminar about the practices of professional relations, the selection of a manager and how to collaborate with the manager. Moira Johnson, international press and public relations discussed the need for professional promotional materials, the increasing importance of social media, blogs and webzines.

The program also included several concerts designed to enrich the experience of the students and teachers. Future years will see concerts and artistic events that will address specific needs in the students’ development.

In this first year, there were three concerts:

One of the goals of the Opera Program was to create a close cultural connection with the city of Montepulciano. The concerts, open to the general public, greatly helped to promote this relationship.

Each student had the opportunity to present their individual artistic abilities in front of a prestigious and influential public and guests had the opportunity to observe both the students and teachers.
Round Table: On August 5, there was a stimulating and highly successful round-table discussion on the training of young opera singers. The discussion among teachers, students, the organizers of the Program, experts from the world of opera/ theater concluded that the experience of the Opera Program had been exceptional. Special guests for the round-table discussion included Franco Rossi, representing the Cultural Section of the City of Montepulciano and Paolo Barcucci, President of the San Girolamo Foundation.

Concluding Comments: The teachers of the principle courses expressed their appreciation for the excellent and unique design of the Program, integrating both the technical and musical interpretation of the students and offered insights into various facets of their future profession.

All the participants emphasized the high level of the artists and professionals giving the courses, the excellent artistic level of the students, and, not least, the superb organization of the Program which fostered both an intense and relaxed atmosphere.
The young singers taking the Program said they had never had an educational / artistic experience on this level; some declared that it was the best and most important experience of their lives. They stated that the teachers offered them not only a professional and artistic experience, including individualized training that addressed their specific talents and needs but also gave freely of their knowledge of opera. The instructors helped the young artists to find their voices, their artistic direction and the repertoire suited to their vocal abilities and their temperament.
Two of the more innovative initiatives highlighted by the participants were the discussions on lighting given by Vinicio Cheli and the fencing lessons. They noted the need for masterclasses at this level and expressed the hope that this initiative will continue to expand. In order to assist with the future development of the Opera Program, Organizers requested that the representatives from the opera houses identify the type of training and skills required by students in order to perform in their venues. It was also suggested that some opera houses might offer annual contracts in future performance seasons to provide young artists with guidance and support.
The Role of the Opera Program in the Preservation of Italian Opera:
Concern was expressed by experienced professionals such as Ms. Wieser, Master Tangucci, and Dr. Fontana that the great tradition of performances and interpretation of the music and artistry of nineteenth-century Italian repertoire is being lost. There is the continued need to support and focus on Italian opera, as was done by the Opera Program in Montepulciano. Because of the lack of adequate preparation, performances often do not meet the expectations of the public and critics.
It was felt by all that the Opera Program, by offering professional training to young artists, is helping to preserve and promote Italian operatic repertoire, and, thus will increase the appreciation for this great treasure.

The Significance of the Opera Program Location:
Another important component in the success of this Opera Program was the selection of Montepulciano, long called the ‘Pearl of the Cinquecento’ and one of the most beautiful towns in Tuscany, as the home of the school. ‘Making art in the cradle of art’ was a phrase adopted by the participants to describe their experience.

The locations used by Program included: the Teatro Poliziano, the Palazzo del Capitano and the Palazzo Contucci, all monumental buildings surrounding Piazza Grande, itself an open-air stage.
The Palazzo Contucci, headquarters of the Opera Program, is a palace designed and built by Antonio da San Gallo (the Elder) in the first half of the 16th century. The Programs were held in the palace Ballroom, located on the ‘piano nobile’ (first floor), which was frescoed in 1701 by Andrea Pozzo, a master of ‘trompe l’oeil’.

The Future of the Opera Program:
Future plans would see the development of these seminars into more in-depth Programs, including substantial collateral materials with the goal of creating a real ‘opera school’ where young professionals in the early years of their careers would find technical and professional experience and support to enable them to enter the international music market at the highest level.
The Organizers would also like to create, given the economic and technical means, parallel Programs for the training of technical and administrative staff, such as managers, theatrical electricians, machinists, tailors, makeup artists, and hair stylists using experienced professional instructors, so that they can pass on their “art and profession” to young people.
A key component of future planning will include the development of collaborative relationships with other training schools in Italian and foreign opera houses in order to provide additional opportunities for the young professionals coming out of these programs. This step was specifically recommended to the organizers of the Opera Program by professionals in the opera world during the final Program discussion and evaluation.
This request was received with enthusiasm and has already has an immediate result: one student has received a formal offer from the Teatro Petruzzelli, and some others have been invited by the Teatro Regio in Torino and the Teatro Regio di Parma for auditions, which could give rise to contracts for future seasons.

Final Statement: The Artistic Directors and Organizers of the Opera Program at Palazzo Contucci would like to thank all the participants who attended this first Opera Program. This Program has set the standard for the international training of young singers, and compares favorably to the more established and prominent Opera academies and schools. 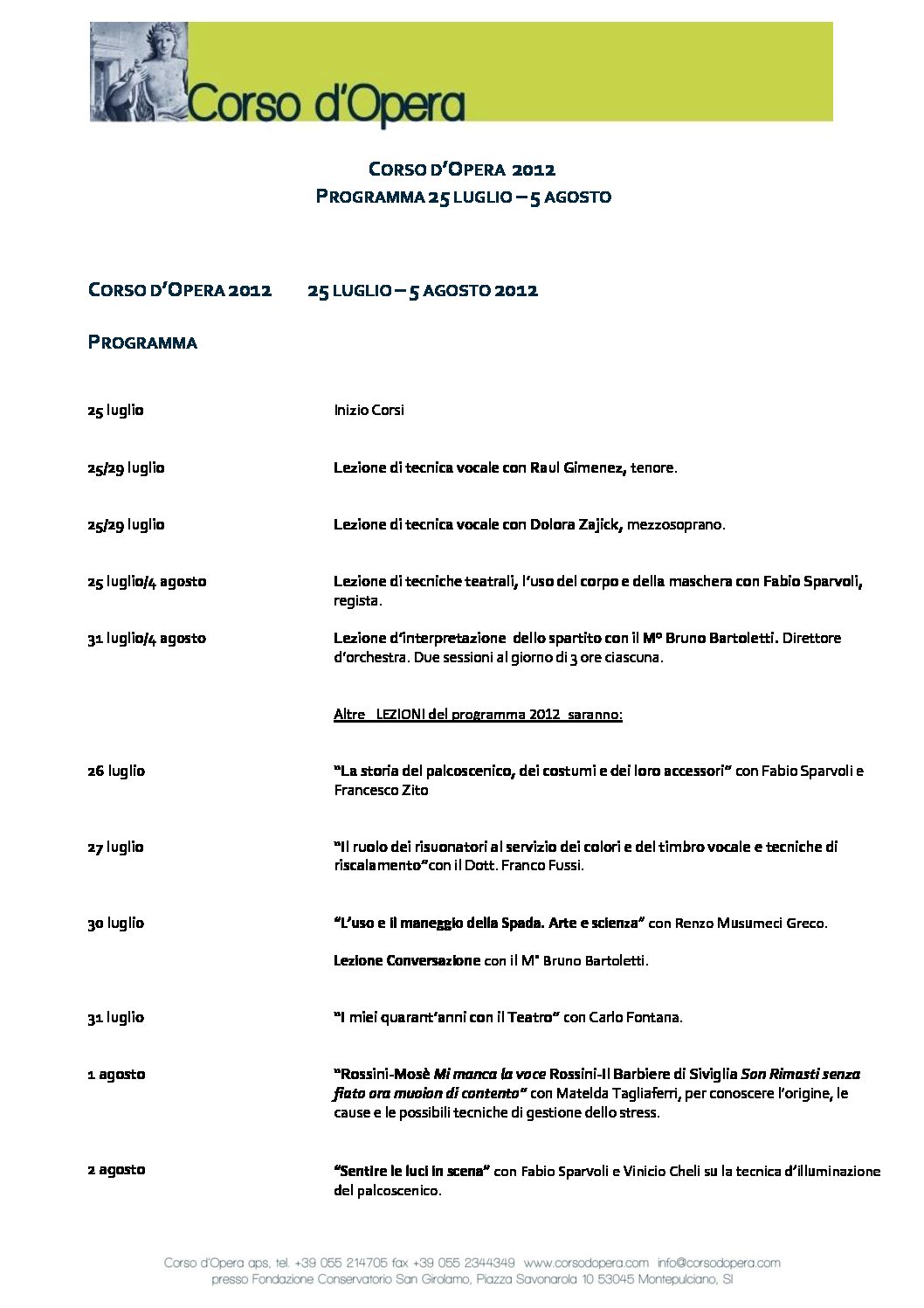