The fifth edition of the Masterclass ‘Corso d’Opera 2016’ (from 22 July to 10 August), as in past years, attracted young singers from around the world (Italy, Ukraine, Korea, the United States and Russia)

The second part, August 2-10, included ‘Vocal Technique’ with mezzo-soprano Luciano D’Intino, in collaboration with Beatrice Benzi, piano collaborator at Teatro alla Scala in Milan; ‘How to Prepare a Concert’ with Beatrice Benzi; and ‘Acting Lessons and The Use of a Mask on Stage’ with Director Fabio Sparvoli.

Highlights of the seminar and conversation program included:

Art Performance and Performance Top Level: Since 2014, Mario Marella, Professor of Science and Sport Technology at the University of Florence and Director of the Laboratory for Applied Biomechanics for the Italian Federation of Soccer has discussed the link between physical fitness and performance and how to improve performance level. In 2016 he added a discussion about the physical preparation as part of his research into the creation of an ideal model for the development of an opera singer.

THE SECRETS OF LIGHTING THE STAGE: Theorical and pratical lessons with celebrated Lighting Designer Vinicio Cheli.

The 19 days of study and discussions concluded with a live concert on August 10, with the special participation of Luciana D’Intino, in collaboration with the ‘Calici di Stelle’ celebration organized by the dall’Associazione Strada del Vino Nobile di Montepulciano.

All of the students displayed their vocal artistry and acting skills in front of an audience of music-lovers including many industry professionals.

On July 30, Maestro Donato Renzetti and the students gave an open lesson at the Caffè Poliziano.

On July 31 and August 9/10 lessons in major courses were open to national and international industry professionals including: Opera Interpretation with Maestro Donato Renzetti with Andrea Severi at the piano, Bioenergetics with Dr. Alessandro Temperani, Vocal Technique with Luciana D’Intino, Concert Preparation with Director Fabio Sparvoli and Beatrice Benzi and Stage Lighting with Designer Vinicio Cheli.

On August 10 the Study Grants were presented by Eros Nappini, President of the BCC of Montepulciano  were awarded to the students of the Masterclass 2016.

The Faculty of the principal courses expressed their satisfaction both for the programming and the high level of the participants.  All are hoping to be invited back for a future edition.

All those who attended were enthusiastic in their support for the “Corso d’Opera”, saying that it provided a training program for young singers on an international level at a time when the tradition of the great masters of interpretation has been ‘forgotten’ and the artistic level of those who sing 19th century Italian does not meet the expectations of either the public or the music press. They stressed that some of the initiatives were of particular interest: the introduction of Bioenergetics, which, according teachers of vocal technique, could be particularly beneficial to singers; the presence of medical specialists and psychologists who were able to discuss particular aspects of the profession which are not usually thought about but which are nonetheless important.

Another area of excellence that was mentioned appreciatively were the locations of the lessons and seminars – the Teatro Poliziano, Palazzo del Capitano, Sala della Giunta e Sala del Consiglio del Palazzo Comunale, the buildings that surround the Piazza Grande, which provide a natural backdrop for opera.

Fundraising efforts in 2016 brought in significant revenue to the Association and it looks positive that we will meet our financial objective by the end of the year.  Fundraising allows us to provide a Study Grant of 1600 euros to each participant. The grants are dispersed based on a clear training program that is agreed to in advance with the Artistic Director of the Corso d’Opera.

Input and output data for 2014 are significant. The numbers are small but the rate of success is important: in 2014, six participants in the Corso d’Opera obtained 24 contracts within 12 months of finishing the course, for a total value of 130,788 euros.

The Corso d’Opera has established a collaboration with the Faculty of Motor Sciences at the University of Florence to undertake a scientific study of the biomechanics of opera singers.

The Corso d’Opera is grateful for the support of the City of Montepulciano, and thanks the Dioceses of Montepulciano and Claudio Borgoni of the Caffè Poliziano for their collaboration. 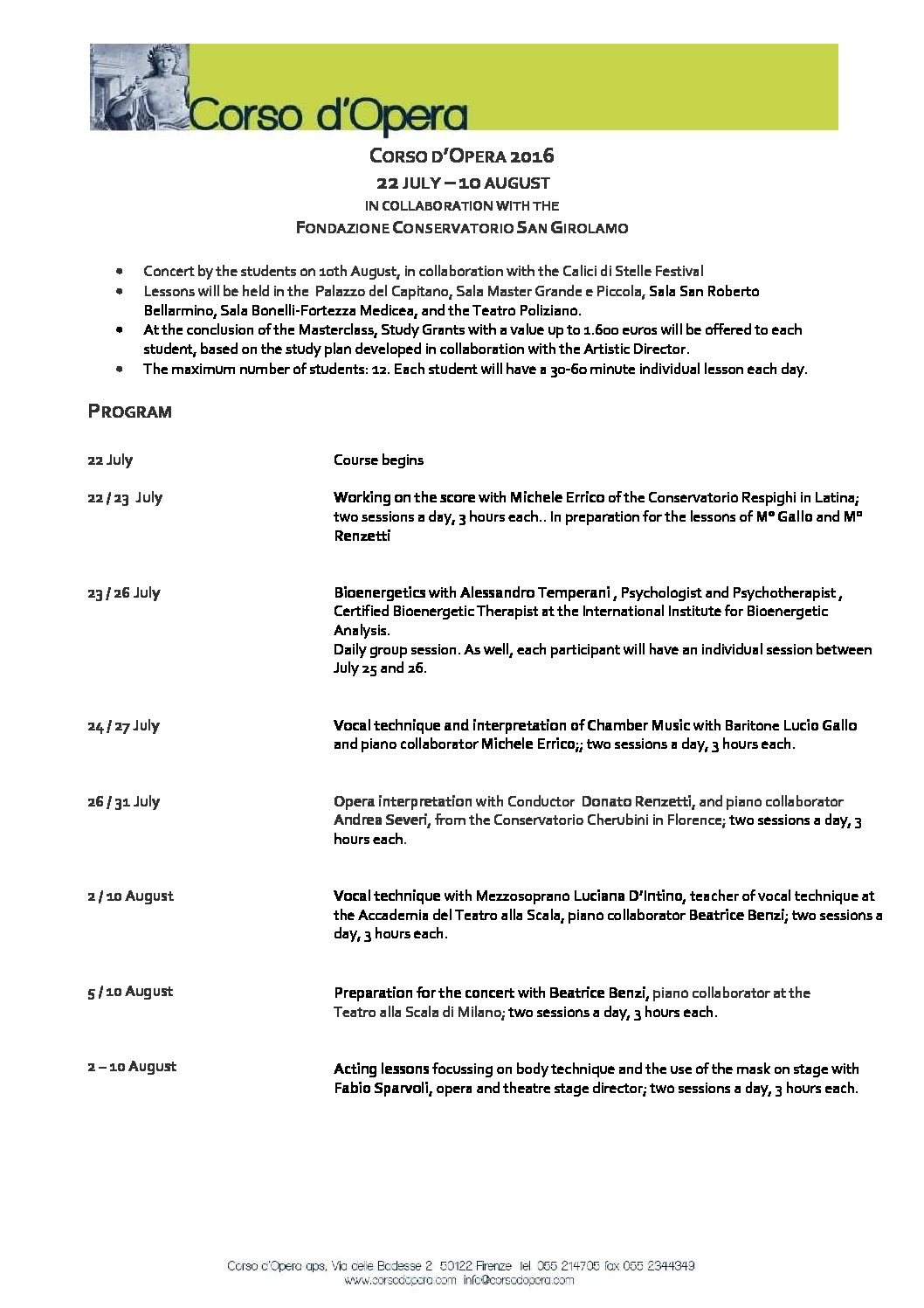